New Radiohead album: Everything we know so far

As everyone is eager for a new Radiohead album the band has decided to slowly disappear from the internet. Is a new album about to be released? Here's everything we know so far including funny tweets...

Update: After disappearing from the internet, Radiohead have in the meantime come back and released 2 new songs: Burn the Witch and Daydreaming. The new album is called "A Moon Shaped Pool" and has been released at May 8th.

Read this post from top to bottom. It's ordered chronologically.

Or jump to the latest events

This morning Radiohead's website began to lose some of its content. Then is started to fade away completely - as of now it's utterly white. The band has also deleted all of its Facebook and Twitter posts and removed all content there as well. Frontman Thom Yorke did as well.

As nobody knows what exactly is going on, we're predicting that it has something to do with the band's ninth album.

Are you excited as well? Be back here to get all the latest updates.

What is known about the new Radiohead album so far?

Last month Radiohead's art collaborator Stanley Donwood said to DIY, that the new album is a "work of art". At this point he hasn't been done with all his work on the new LP, but it sounded as if the music part was somewhat ready and very promising.

Then on April 14th, band manager Brian Message said that the new album will be out in June for sure and it "will be like nothing like you've ever heard".

Taking into account, that Radiohead confirmed a performance for this year's Primavera it might be possible that Radiohead's LP9 is actually coming very soon.

Will the new Radiohead album be available on Spotfiy?

That's also something band manager Brian Message addressed in a small round of 30 people as The Guardian reports. He said: "And I hope – I really hope – it does come out on streaming services. To say that’s been answered, believe me it hasn’t, but I’m praying every night that it does."

And then there were postcards. During the last couple of days several fans received mysterious Radiohead postcards that said "Sing the song of Sixpence that goes / Burn The Witch / we know where you live". Nothing is known about what that means, but these cards are somewhat spooky. 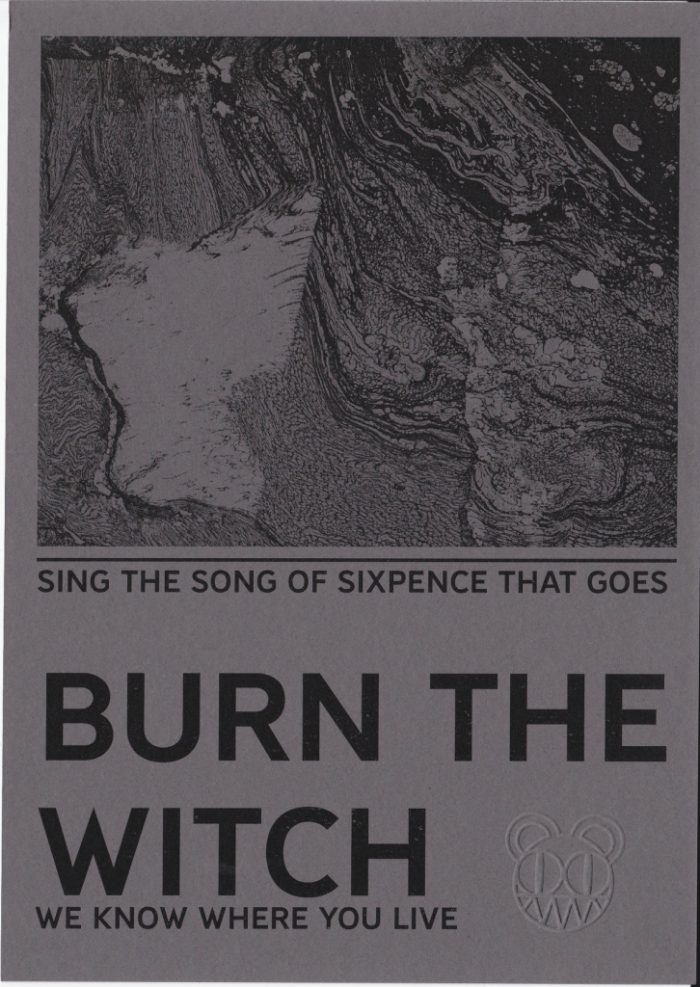 And of course the internet is going crazy right now. Here are some funny tweets.

"Ummm guys...I think I might have deleted something here..." #Radiohead pic.twitter.com/Pl5GMFx718

Radiohead can erase their internet presence but they can never erase this gif of Thom Yorke dancing with a bear pic.twitter.com/cylxrJg2k2

It's been a hard night for Radiohead fans. This tweet summarizes the situation:

Radiohead's producer is now the only one breaking the awkward silence Radiohead has cast upon us. On Twitter he shares a cryptic image showing a page from Plot Genie Index, a 1936 book by Wycliffe A. Hill. The book is about how to write noir and pulp fiction.

And then, out of nowhere Radiohead's Facebook page shows a new video. There's a bird. A bird? Yes, a bird. It's singing. But I don't speak bird, so I don't know what it's about. Any ornithologists out there?

1 hour later: Now, if you visit Radiohead's official website, it is redirected to the band's blog. And guess what...it shows the bird!!! DAMN YOU BIRD!!! ...argh, now it's gone again. I saw it, I swear!!!

People seem to agree on the message that Radiohead is sending here. In an interview Thom Yorke gave in 2015 he said:

"The creators of services make money … by trawling, like in the sea — they take everything there is. ‘Oh, sorry, was that yours? Now it’s ours. No, no, we’re joking — it’s still yours.'".

So are we talking about the issue of digital footprints here? About the fact that you cannot delete yourself from the interwebs?
Sources: Washington Post, Tech-Bit

New update, noon: The bird on the website seems to appear in cycles and someone found out about a new company called Dawn Chorus that Radiohead have registered. So people think LP9 will be called Dawn Chorus and faces its release at May 4th around 4:30am. The time, when birds start to sing.

New album release time cracked. The 'dawn chorus' is when. The bird, the morning. 4:47am in GMT time. #radiohead pic.twitter.com/xSCNEToLgU

There's some more evidence, that the theory about Dawn Chorus might be correct here.

And now I've done some digging: There is a company registered to the brother of Johnny Greenwood here.

12 minutes ago, at 1pm CET, Radiohead released a new video on their Instagram and Dead Air Space blog which might contain new song material...

What does band want to tell? That the album comes out tomorrow morning (bird) and at noon the first reviews will be in and devastating (people with swords hitting the lady)??? If you tweet (bird) trolls will hit you (sword guys)??? Maybe the album will NOT be called Dawn Chorus, but really Burn the witch as the postcard suggested?

I'm doing some more guessing here. Going back to the postcard I get there is a Song of Sixpence rhyme that goes:

Sing a song of sixpence,
A pocket full of rye.
Four and twenty blackbirds,
Baked in a pie.

When the pie was opened,
The birds began to sing;
Wasn't that a dainty dish,
To set before the king?

The king was in his counting house,
Counting out his money;
The queen was in the parlour,
Eating bread and honey.

The maid was in the garden,
Hanging out the clothes,
When down came a blackbird
And pecked off her nose.

So the bird began to sing...we heard this morning. The king counted his money (see Yorke statement from 2015, where he said something like "Spotify is counting the money") and while doing so the queen got pecked off her nose by a blackbird, whereas the blackbird is sometimes referenced as "naughty boys" stealing her sould. Here we are. Fits perfectly. Is the queen us? Will Radiohead save us? Is the new album the anti-tech opus we've been waiting for? What do you think?

When looking at the last verse of the rhyme:

They sent for the king's doctor,
who sewed it on again;
He sewed it on so neatly,
the seam was never seen.

there should be a new song, video or even the album coming next to save us...

YES! As it has been guessed before here is at last Radiohead's new song "Burn the Witch" including a great video!

2 days after "Burn the Witch" was released Radiohead give us yet another song from the new album. The track is called Daydreaming and was directed by Paul Thomas Anderson.

Also Radiohead have given a release date for their yet untitled new album, which everyone refers to as LP9. It will face a digital release on May 8th.

Today, at 7pm BST Radiohead have released their new album "A Moon Shaped Pool", which is available here as well as on Apple Music, Tidal, Amazon and iTunes. Not on Spotify. Wow. I got it that Radiohead had some issues with streaming services, but streaming now and excluding parts of the available services is pretty awkward.

That's all folks. I hope you enjoyed this listing of events :)

Daydreaming
As Radiohead have announced their LP9 für 8th of May, the band also releases another single called "Daydreaming".

Burn The Witch
After 2 days of guessing and speculating, teasing and shmeasing Radiohead have finally returned with a new song called "Burn the Witch" - listen!

The Blessed Isles
Straining Hard Against the Strength of Night

Chris Cohen
As If Apart